Choosing an Inverter for Use in Caravans 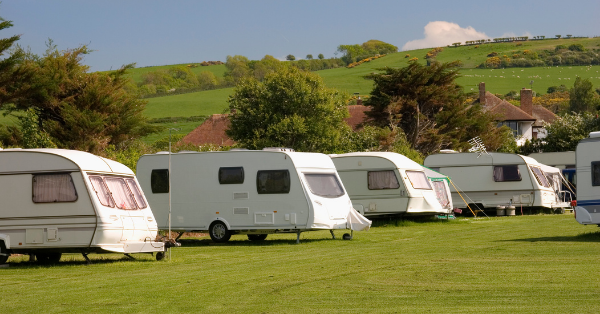 This blog post aims to help auto electricians select the most suitable MEAN WELL inverter for use in a caravan’s electrical system.

We look at the applications for each one and discuss the features of benefits offered by MEAN WELL.

All inverters take direct current (DC) from a battery, solar panel or other generating source and convert it into the 240V alternating current (AC) made available at a power point, or 2 power points on the inverter.

It is at the AC output stage where the types of inverters differ.

Modified sine wave inverters are highly cost effective, but they are limited by the number of applications they can be used for.

As you know AC alternates its direction of travel repeatedly at a fast rate. This rate is measured in frequency (Hz). In Australia, the 240VAC power supply is delivered at 50Hz (50 cycles per second).

AC mains power alternates smoothly with a sinusoidal curve that has a rounded peak and a clean ‘zero cross’ to a rounded valley. This is known as a true sine wave or pure sine wave, as depicted in the following diagram:

Modified sine wave inverters do not work well with sensitive or advanced electronics. This is because some digital clocks use the incoming AC current to calculate time.

Because modified sine waveforms ‘rest’ on zero for a few milliseconds. The microprocessor could read this ‘rest’ as multiple zero crosses resulting in the time being calculated incorrectly. Many electronic devices have built-in clocks.

Modified sine wave inverters are a cost-effective option for powering electrical equipment that does not have any sensitive electronic circuitry. For example, a simple induction load like a motor, or a resistive load like a heating element. In other words, appliances such as fans, toasters, vacuum cleaners, etc.

We have listed the range of stocked modified sine wave inverters at the end of this blog post.

This means they can power any device that you would normally plug into a power point at home or in the office, including electronic devices.

The NTS series was launched in Q4 2021, and the TS series is likely to be phased out over a period of time. At the time of writing this blog post, there was no NTS series inverter available larger than 1200 WATTS.

The NTS series inverters differentiate themselves from general consumer grade inverters by adopting an industrial-grade high reliability, high safety, high quality design, which is why they are available with a longer warranty period.  We have listed the models ADM stocks at the end of this blog post.

They also feature several protections such as:

There is an RS232 cable available as an optional extra, which allows you to remotely monitor the inverter from a laptop or PC.

Some of the NTS and TS series inverters can also be controlled remotely via a remote-control unit, which is available as an optional extra. We discuss these in more detail toward the end of this blog post.

They also feature an AC bypass mode. When AC power is available this will be passed directly to the AC outlet on the inverter.

There are two operating modes that can be selected:

The unit will be factory set in the UPS mode.

Depending on the weather and availability of AC power, users may opt to switch to the Energy saving mode.

In UPS mode, the inverter will remain in the AC Bypass mode if AC power is available. This is likely to be the most appropriate mode for use in caravans.

In Energy saving mode, the inverter will select external solar panels as its priority input. In case of insufficient solar power and lack of AC power, battery power will be drawn on as the last resort. When the capacity of batteries is around 10~20%, the CPU will alert the user by continuously sounding a warning siren until the system shuts down.

Monitoring software is available that allows you to monitor the status of the inverter / charger to adjust the following parameters: 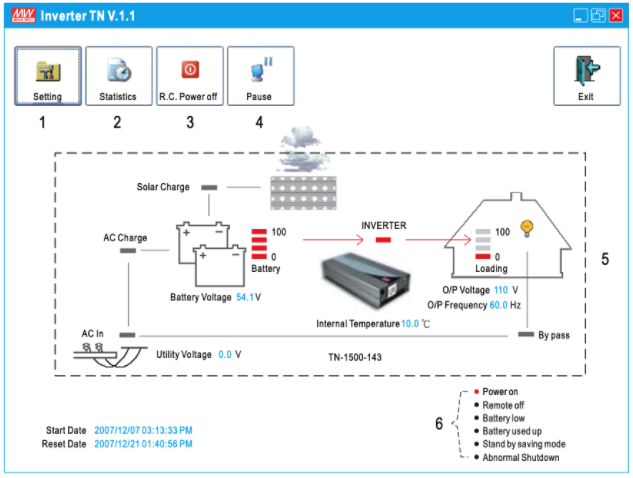 The TN-1500 and TN-3000 can also be controlled remotely via a remote-control unit, which is available as an optional extra.

We have listed the stocked models at the end of this blog post.

There are 3 remote control units available

The one you choose will depend on the level of functionality required and the inverter you are using.

Please do not hesitate to contact ADM if you have any questions about MEAN WELL inverters.

IS THIS INFORMATION USEFUL?

MEAN WELL UPS Power Supplies with Battery Back Up

UPS Power Supplies for Lift and Elevator Systems Back Up