A Faster and more Cost-Effective Alternative to UPS Systems

Working from home and remote learning are becoming more commonplace. This means that there is evermore voice, video, and email data being transmitted via electronic devices.

The growing demand for services such as online conferencing means that larger data centers and cloud storage capacity is needed.

One of the key requirements for a data center is power stability. Typically, an uninterruptable power supply (UPS) is used to ensure system stability.

UPS power supplies are commonly used in areas with frequent power failure, or to power critical infrastructure. When the AC does fail, the UPS needs about 2 to 10 milliseconds to switch over to battery output.

The operating temperature of batteries is typically around 0℃~ 40℃. Some batteries need to be fan cooled, which can be noisy. Moving parts are also known to increase the likely failure rate of a device.

The large size of a UPS, its noise, and required maintenance schedule can be an inconvenience. To mitigate these shortcomings, MEAN WELL has introduced buffer modules as an alternative.

The following table gives you a snapshot of benefits that buffer modules bring.

Because the buffer module uses capacitors instead of batteries, it is much smaller, more cost-effective, and maintenance-free.

Buffer modules also have a faster response time than a UPS.

The buffer module and the output of the power supply are directly connected in parallel as shown in the below diagram: 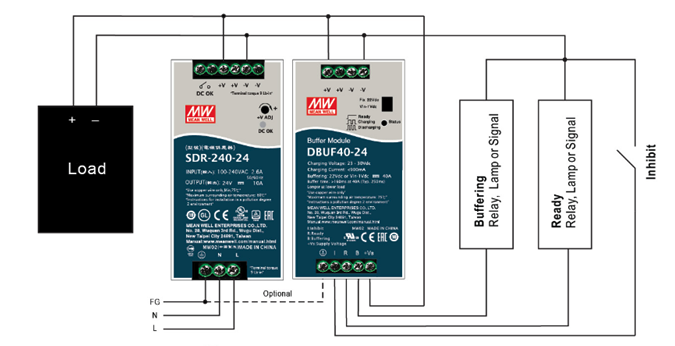 If the AC is to fail, then so will the output of the power supply. The capacitor in the buffer module will immediately provide power.

The following video clip includes a demonstration on how quickly a MEAN WELL buffer module starts providing power after the AC supply has been cut.

If the equipment being powered requires a larger load, or longer buffer time, multiple buffer modules can be used in parallel as shown below: 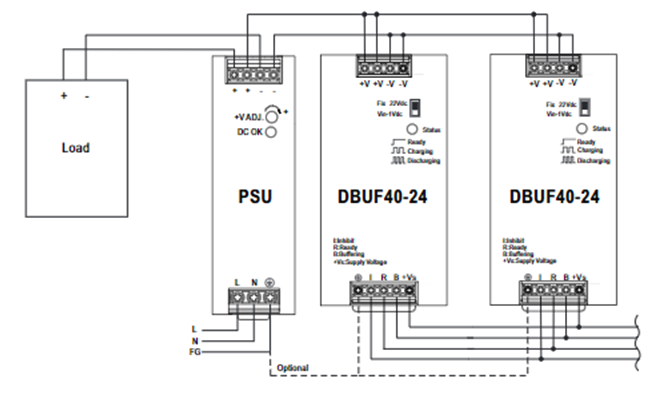 Compared with a UPS, a MEAN WELL buffer module has a simpler design. This means it is more compact and its reliability is relatively higher.

The overall MTBF (meantime between failure) rate is also slightly higher than that of a UPS.

MEAN WELL buffer modules also feature a relay output. When the AC fails, the built-in relay is activated, giving an alarm so that preventative action can be taken, whilst the buffer module is supplying the power.

When reliability, size, noise, cost, operating temperature, or maintenance aspects are considered, a MEAN WELL buffer module could be more advantageous, and is a smart choice for most users.

Of course, a UPS and a buffer module each have their own advantages and disadvantages. The best solution will be the one that best meets the requirements of the end system.